The idea behind Noah’s Farm was born in early December 2007. I was trying to think of a Christmas gift for my wife of 36 years. Frankly, she really didn’t need anything. She might want this or that but really didn’t need it. I tried to remember what I got her last year for Christmas. Since I couldn’t remember, it was obvious that whatever it was, she didn’t need it and it was certainly not meaningful. So, why not do something truly meaningful for her for Christmas this year?

For the past several months, we had been helping local Pastor Rev. Noah Sibanda in Gweru, Zimbabwe, Africa. He had been sharing with me the needs of his people. With 80% unemployment and the highest inflation rate in the world, the primary need was to help with the school fees for many children in his congregation. Unlike the USA, where property taxes pay for public schools, in Zimbabwe if your child wants to go to school the parents must pay for it. These kids know that their only hope out of poverty is education. I asked Pastor Noah Sibanda about the average cost of school fees. His reply was that approximately $60.00 (in 2019 it is now $180.00) would pay an elementary students school fee for an entire year! Wow, that is the cost of one steak dinner for two. Or that could be the cost of a couple of DVD’s that probably aren’t worth watching.

My problem was solved. I would send Pastor Noah $60.00 and he would see to it that the school fees were paid for an entire year for one deserving underprivileged child. My wife, who absolutely loves kids, thought it was a great idea. For sure, we would both be able to remember next year what we had done for Christmas.

Pastor Noah identified twenty kids who were deserving of this special gift. We then devised a simple program. These kids were told that they needed simply to maintain good grades and attend church regularly to ensure that their school fees were paid. I then sent out an email to some of my friends and told them about the project. Many of them decided to do the same. The money was collected and the twenty kids were off to school in January 2008 as their school year begins in January.

The following year 2009 we identified 53 kids for the program. More donors heard about the program mainly through word of mouth – friends telling their friends about this project and a creative way to have a meaningful Christmas. The money came in and the project continued to grow.

As time goes on, it is exciting to learn about the accomplishments of the students. I am so proud of each and every one of them! They are hard working and do not take for granted the sacrifices that have been made for their education by their US friends. I’d like to share one of the student’s story’s with you:

Early in our relationship with Noah, we had sent separate funds to have a water well dug for the benefit of his family & congregation – as they were in the midst of a severe drought. The borehole was dug just 25′ from the front door of the church! Our agreement was that we would supply funds for the well project as long as the water was given away free of charge. Then one of the students 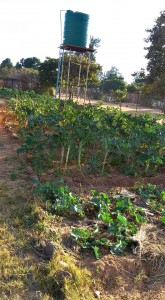 told us he had a “green thumb” and wanted to plant a garden. His idea was to supply vegetables for the people who helped him with the garden for free. He would then sell the rest and the money would be used to help pay school fees. Today the garden is about 30′ wide and about 300′ feet long. With the abundance of water, it generates the best vegetables in the area and funds the education for several children.

With the success of the vegetable garden and the realization that many of the students in the program were hungry thus making it tough on them as they sat in school, Pastor Noah with the help of some of the students, came up with a plan. If we could build a self-sustaining farm we could supply food, jobs and the profits would pay for the workers children’s education. One of the students found some raw land in a government program. We could lease the land for $1.00 per month for 99 years if we had a plan that the government would approve. A plan was drawn up and approval obtained. It called for building a church by the road. Once completed they would allow us to use the church during the week as the headquarters for the farm we would develop behind the church. Volunteers cleared some of the land and will form the bricks themselves. We raised the funds for the cement and the fence for the church. We raised the funds for a water well on the church property and it is a very good well.

If you would like to do something meaningful now or for Christmas this year, please click on the Donate tab for instructions on how to send your tax deductible gift. We accept credit cards through the secure PayPal program and, of course, we gladly accept your check. I am happy to tell you that 100% of your gift will go to this project in Zimbabwe as there are absolutely no administration costs deducted for this project.

You have learned how we started out as just a group of friends who wanted to do something memorable for Christmas 2007. Now that the project continues to grow and has become highly successful we determined during 2009 that the time was right to incorporate. We chose to continue to use the name LastYearsChristmasGift.com as our corporate name in memory of how the project got started. This History goes into more detail, but the short version is when I couldn’t remember what I had bought my wife for Christmas last year I realized it wasn’t a meaningful gift. The basic idea of this project is to do something memorable for Christmas this year by helping pay for the education of the underprivileged in Zimbabwe, Africa.

As the project continued to grow we realized that the mission of the project was proper. However, with many of the kids going to school hungry we realized there had to be a more effective way than simply supplying education grants. Because of the vision of Pastor Noah and some of the students we changed the name to Noah’s Farm. We did not name the project after Pastor Noah we just got the idea for the name and thought about Noah in the Bible. Being in Africa and all the animals and the animals on the Ark the name seemed to fit. Also, Noah of the Ark really was an evangelist and we wanted to spread the gospel. We set up a new website, www.NoahsFarm.org. Noah’s Farm is now Incorporated as a Texas Non-Profit company. Donations are fully tax deductible. We operate with a three person volunteer Board of Directors. They are:

Les Thomsen, President & Co-Founder. Presently Les is a resident of San Antonio, Texas, and was a member of the Pioneer Class of Mid-America Nazarene University in Olathe, Kansas. As a teenager Les lived with his family for two years in Uganda and Kenya in East Africa. He has been married for over 47 years to his college sweetheart. His wife Lane joined Les on a trip to Zimbabwe, Africa during August 2008 where she taught Vacation Bible School to over 100 children..

Dr. Tamara DeShazo, FNP, is Senior Vice President and is the key person of our newest division of Noah’s Farm, Medical Missions. Tamara went on her first mission trip to Zimbabwe in Aug. 2016 and spent some time working at a local hospital. She has laid the ground work for this medical division and went back to Zimbabwe in Aug. 2017 to finalize plans for future medical mission trips for groups.

John Buxie, CPA, is Treasurer, resides in San Antonio, Texas and has been in private practice for over 20 years. John serves on the Board of several companies and has been instrumental in the success of Noah’s Farm, Inc. through his network of contacts.

Noah’s Farm company policy is 100% of the donors gift will be sent to Africa to futher the education of the underprivileged. There are no employees, only volunteers, who believe in this project. There are no administrative costs paid for by your donations. Those costs are raised seperately by Les & Lane Thomsen.

Thank you for considering this project so you too may enjoy the pleasure of a meaningful gift now, and at Christmas.