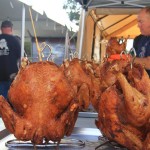 The whole idea of cooking deep-fried turkeys started in 1989 when my brother Vandy and I had our Big A Auto Parts store in Washington, Missouri. In February of that year we were having our annual Big A Filter Sale. Vandy was talking with our Account Executive, John Robertson, from the Big A Auto Parts Corporation about how to make it an extra special event. As it turns out John was originally from Louisiana. He shared with Vandy about a tradition in Louisiana called Cajun Deep-Fried Turkey. During this era, deep-frying turkeys was unheard of outside of Louisiana. Since both Vandy and I like to cook, the idea quickly took hold. John loaned us his cooker, showed us how to do it and we promoted the deep-fried turkeys along with the filters. It was a big success.

When the Thanksgiving Season came that year we were thinking what to do special for the auto repair shops in the area who regularly bought from us. It was typical in those days for auto part stores to hand out “girlie” calendars. We did not want to be a part of that and tried to come up with an idea that was unique. Because Vandy remembered the success we had with the deep-fried turkeys hence we decided to expand on that.

Because there were no stores that carried cooking kits like there is today we decided to make our own cooking kit. We found an appropriate propane cooker and went to the restaurant supply store and bought a “stock pot”. We had a 3 bay repair shop in one section of the auto parts store. After cleaning off one of the benches we spread out “white butcher” paper and went to work preparing 7 turkeys. Also we contacted the local Jaycees Club and borrowed their portable steam table and filled it with all the trimmings including fried potatoes. We would cut up potatoes into chips and fry a batch between when one turkey was done and another ready to go in the pot. Furthermore the chips not only tasted great they help clean the oil.

Then we borrowed folding chairs from the high school to line the store aisles. We spread the word that we were serving a full turkey dinner. Because the mechanics loved it so much we quickly ran out. The following year we prepared 12 turkeys, and again quickly ran out. The next year we prepared 16, then 22, then 28, and the final year 32 turkeys! Furthermore we were fortunate that we had great customers who loaned us their cookers. All totaled we had 6 cookers going which was quite the sight in that auto repair shop. It was the most talked about promotion in the entire town’s auto repair industry. They even talk about it today. Yes, a huge success it was.

Consequently we had a problem every year, where to put the turkeys for the two days they were marinating. Across the parking lot from our auto parts store was a National Grocery store. The manager was kind enough to let us use the store’s cooler. However, when the store changed managers, the new one was not keen on the idea. As a result without a place to store the turkeys we were forced to abandon the annual promotion.

Since then I have tweaked the recipe including adding the injection feature. Also, my son Chip keeps playing with the recipe and taught me to add some Louisiana Hot Sauce to the injection marinade for a very special flavor.

The remaining 500 turkeys we sell for $55 each to anyone or any company that would like them. They are all special ordered by going to our website www.NoahsFarm.org and click on “Deep-Fried Turkeys” then click on “Order”. We start taking orders November 1st, 2017. Since we do sell out every year you want to get your order in as soon as you know when you are going to have your Thanksgiving meal. They are only available the Tuesday, Wednesday and Thursday of Thanksgiving week. We do not cook at Christmas.

All proceeds go to digging water wells in Zimbabwe, Africa and to help needy kids obtain an education in Zimbabwe.

One question we get from someone who has never tried our turkeys is what do they taste like? First we do not advertise them as Cajun deep-fried turkeys. We simply call them deep-fried turkeys. The reason is they are not a hot spicy turkey. They have a mild Cajun flavor and are very juicy. Thus my 96 year old mother loves them and a 2 year old baby loves them too. They are designed to go along with a typical Thanksgiving dinner.

In conclusion, we hope you will become one of our many repeat customers who believe our deep-fried turkeys are the best turkey you will ever eat. Welcome to the family!

Here is the deep-fried turkey process that Les and the fantastic volunteers do to make so many people happy.